NWO Sports Hall of Fame Inductee Lloyd Stansell made the annual trip to Fort Frances for ice install.  83 years young and still going strong is how Lloyd Stansell operates.  Lloyd was here along with Brent Adamson and Justin Lewtas to work with Lorne Jackson, Ron Silver and Todd Moxham.  The ice was painted white with a special sprayer.  The ice decals were unrolled from their cylinders and laid flat ahead of going on the ice for the season.  The guys had a lot of fun.  Their hard work is appreciated!

We’ll be ready for our first event October 4th and 5th.  Sign up for Rock n Roll! 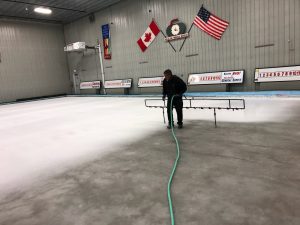